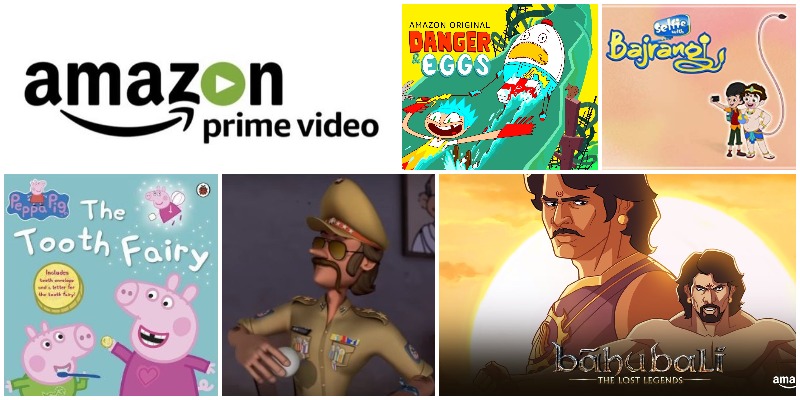 You thought Netflix would dominate the video streaming market and Amazon would quietly watch? Not so soon my friend. Amazon launched its own video streaming platform called Amazon Prime videos in India on 26 July 2016. It has just been a little over two years and people are already going crazy after it. There are tons of Prime original shows and some of them are even getting mainstream awards like Emmy and Golden Globe. It definitely is a must watch thing. Being so new it has become a solid competitor for Netflix.

What you do not know that it is an amazing entertainment source for kids too. There tons of animated cartoons to watch let us get to know the names of a few of them.

This animation show is one of the most popular animated series watched by not just children but all Baahubali fans. The third season is currently airing making all the people go bonkers. All the characters of this animated piece are the same as the original film. Every single episode has a twist and turn of its own. It is a continuing series which makes it even more interesting for people to watch. Do not forget to give this a watch. This one has also been highly acclaimed by animation and web design courses stating that the quality of animation is very good.

Danger and Eggs is another popular cartoon show with top quality animated content and an interesting storyline. D.D. Danger is an imaginative thrill seeker. On the other hand, her best friend, a lawful good, safety-first anthropomorphic egg named Phillip tries to help her. You will experience a series of enjoyably funny adventures as “they do stuff”. Or, as the theme song aptly sums it up – “it’s kind of hard to explain”. Danger and Eggs is the best example of how having the knowledge of web designing and animation courses can help you achieve the best concepts with just very minimal effort.

Peppa Pig is a pre-school animated show meant for kids. It is full of colours, joy and enthusiasm. Everyone will love it with its adorable animation and cute character designs. It is a British animated television series which has taken over the digital platform with Amazon Prime Videos. Voot is another app where one can stream and download this. The characters wear clothes, live in houses, drive cars, but display characteristics of the animals on which they’re based. Peppa and her family snort like pigs during conversations in which they are speaking in English. The other animals make their respective noises when they talk, with some exhibiting other characteristics too. This amalgamation of animals and human-like elements make its animation worth more the praise and appreciation.

Yet another animated show out of popular Bollywood film, Inspector Chingum is children’s laughter potion. Based on the famous Singham character, Bajirao Singham, this Inspector character is full of comedy and laughter. The show has been getting a very good response so far. With the elastic quality of animation, it has won so many hearts in such a small period of time. This is rather a spin-off for the famous cartoon show called Motu Patlu.

Selfie with Bajrangi is an action comedy animation drama series which started this year itself. In just such a short span it has got web designers and animator artists at awe. They are all astonished by the positive response it has been receiving in these few days. Selfie with Bajrangi is about a modern Hanuman who appeals to the kids with a modern twist. Adding the selfie element was very smart on the producers’ part to make it more pop culture.